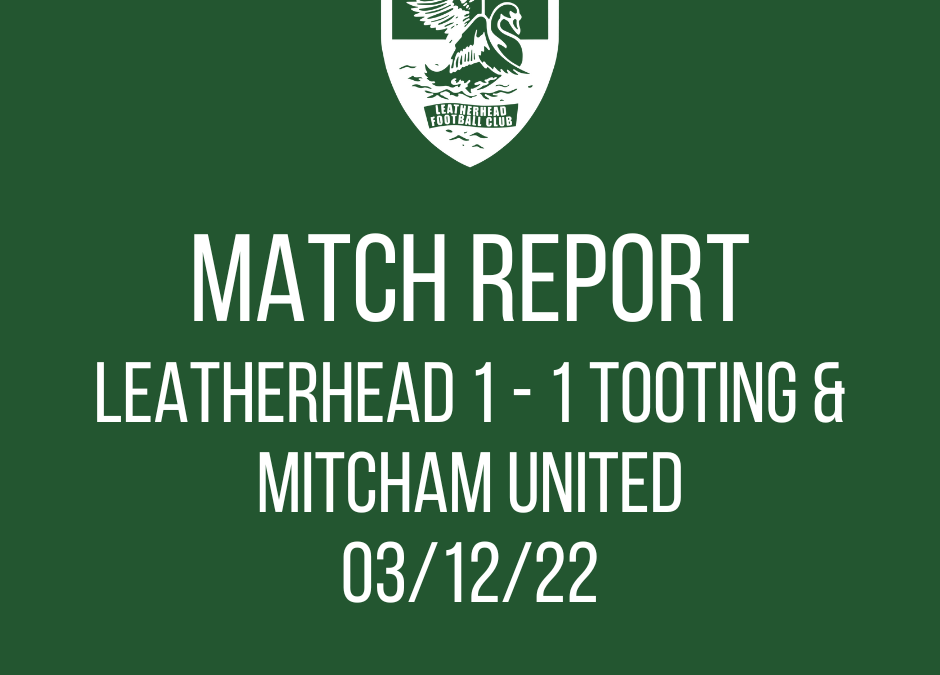 Dave Tarpey rescued a point for Leatherhead with a late equaliser following a tense encounter against Tooting & Mitcham, in a match which the hosts should have put to bed following a dominant first-half display.

The Terrors played out more than half of the match with ten men, following Kynan Kirlew-Wright’s dismissal for a desperate late challenge on Tarpey.

But, as is so often the case, following a first half display where Leatherhead threw everything but the kitchen sink at Tooting without scoring, the visitors came out fighting after half-time and very nearly held out for a win following Jake Rose’s superb volley on the hour mark.

Tanners had a chance to open the scoring on seven minutes when Tarpey fired over from close range. Leatherhead’s captain missed another opportunity on 19 minutes, heading over Louis Collins’ fine delivery from the right.

With wave after wave of attacks and corners, it appeared to be only a matter of time before Leatherhead would open the scoring. Further chances went begging as Dan Hector delivered a probing diagonal ball across the penalty area and new signing Jerry Puemo headed wide from a Keane Anderson corner.

Tanners missed another great opportunity to break the deadlock on 28 minutes. Reise Allassani fed a through ball to Tarpey on the edge of the box, but Terrors keeper James Shaw did well to block the Leatherhead striker’s low drive with his legs. Shaw again reacted quickly on 39 minutes, making another fine save to block Max Mullins’s rasping effort from the edge of the box.

The visitors were reduced to ten men on 41 minutes after Tarpey burst clear with the ball at the half way line, only to be pulled back by last defender Kirlew-Wright.

Tooting opted to attack with purpose in the second half and almost took the lead on 52 minutes when Raees Bangura-Williams’s goal-bound effort was tipped over by Leatherhead keeper Slav Huk. The Terrors continued to press forward and Huk made another fine save to deny Shamal Edwards six minutes later.

But there was nothing Huk could do to keep out Jake Rose’s thunderous 25 yard volley on 60 minutes which flew into the top corner – a goal of the season contender in any league.

Tanners struggled to contain their composure as the visitors took every opportunity to break up play during the remaining half hour. Leatherhead looked disjointed in the final third going forward, losing possession all too easily and failing to test Shaw with any meaningful crosses into the box until the final tense moments of the match.

With the board going up to show five minutes of added time, Tarpey pounced on a loose ball in the midst of the visitors’ penalty area, smashing it home from twelve yards to give Tanners a share of the points.

While Tooting will feel desperately unhappy not to have held out for a win, the draw was scant consolation for Tanners, who were left kicking themselves that their first half dominance had counted for so little at the end of a match that they should have won.