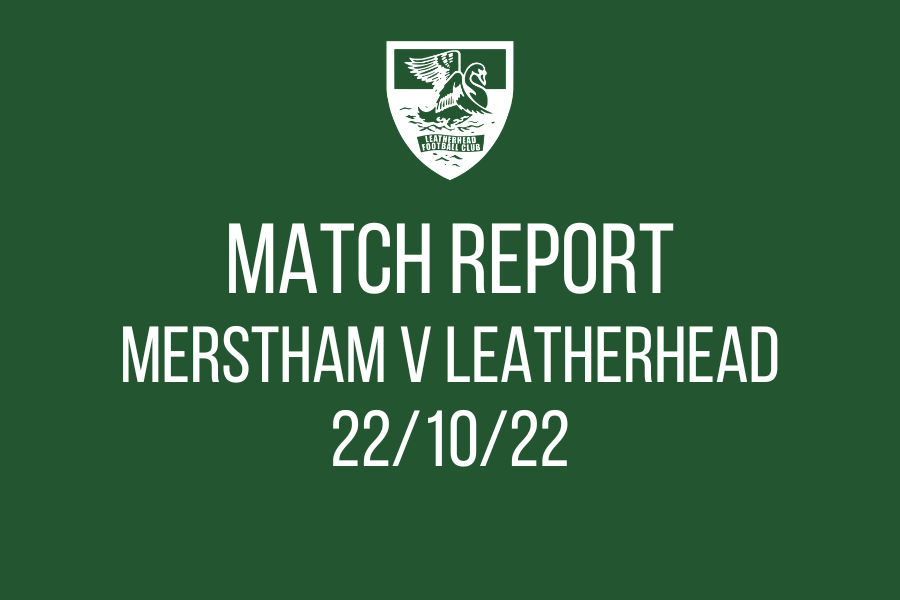 Leatherhead secured their second league win of the season with a hard fought 2-1 victory at bottom of the table Merstham.

Goals from Trey Williams and Dan Hector gave Leatherhead manager Hayden Bird the all-important boost he was seeking, to lift Tanners three places in the league table to fifteenth.

Bird handed debuts to new three more of his new signings, with Michael Elechi in defence, Olly Allen in midfield and former Merstham, Carshalton and Sevenoaks striker Hector in attack.

But it was the Moatsiders who looked the more likely to score in the opening minutes. Within sixty seconds of kick-off, Luke Read was allowed room to advance into Leatherhead’s six yard box before seeing his shot scrambled behind for a corner.

Merstham failed to take full advantage of another opportunity three minutes later when Leatherhead’s Keane Anderson miscued a clearance on the edge of the visitors’ penalty area. And on nine minutes Tanners keeper Luke Williams was called on to make a fine save at the feet of Charlie Greenwood, as once again the Moatsiders pressed forward.

Merstham created another good chance on 35 minutes, with Charlie Alexiou breaking through the middle of the Tanners defence to force another brave save from Williams.

But having ridden their luck and got through to half-time without conceding, the visitors came out for the second half much more engaged as they began to focus on the task in hand.

Leatherhead started to create some chances of their own in front of goal and almost broke the deadlock on 54 minutes when Reise Allasani’s goal-bound effort was cleared off the line by Merstham’s Rory Dacosta.

The visitors finally got the break they were looking for with a superb strike from Trey Williams on the hour mark. Williams collected the ball in midfield and played a delightful one-two with Hector before rounding the last defender and picking his spot to beat the Merstham keeper from the edge of the area.

Leatherhead’s lead was short-lived however, as three minutes later Merstham’s Michael Aziaya latched onto a loose ball to fire home a screamer from thirty yards.

Both teams decided to throw caution to the wind in the final minutes, with neither side prepared to settle for a share of the points. And the decisive winner came to Leatherhead on 85 minutes. Hector collected a cross wide on the left and rounded a defender before firing an unstoppable shot into the far corner of the net.

The Moatsiders desperately threw men forward in the closing minutes. But despite goalkeeper Mo Otuyu going up to the visitors’ six yard box for a corner and half-chances falling to Alexiou, Lorenzo Lewis and Bryan Zepo, Leatherhead held out to the final whistle, leaving Peter Adeniyi’s winless Merstham firmly rooted at the foot of the table.